Oregon State declares an emergency, and calls for a study into “universal home visits” for new parents from nurses and other licensed practitioners. The study is due by December of 2019, but the bill is already drawing concern from the public.

Despite programs around the nation similar to the one proposed in this bill, none are state funded. Programs such as Family Connects, a Durham, NC, based program submitted comments to the the Washington hearing, citing their success with a similar voluntary program.

But here’s the catch, nothing is ever as simple as it seems, and this is especially true when it comes to receiving “free” government services. 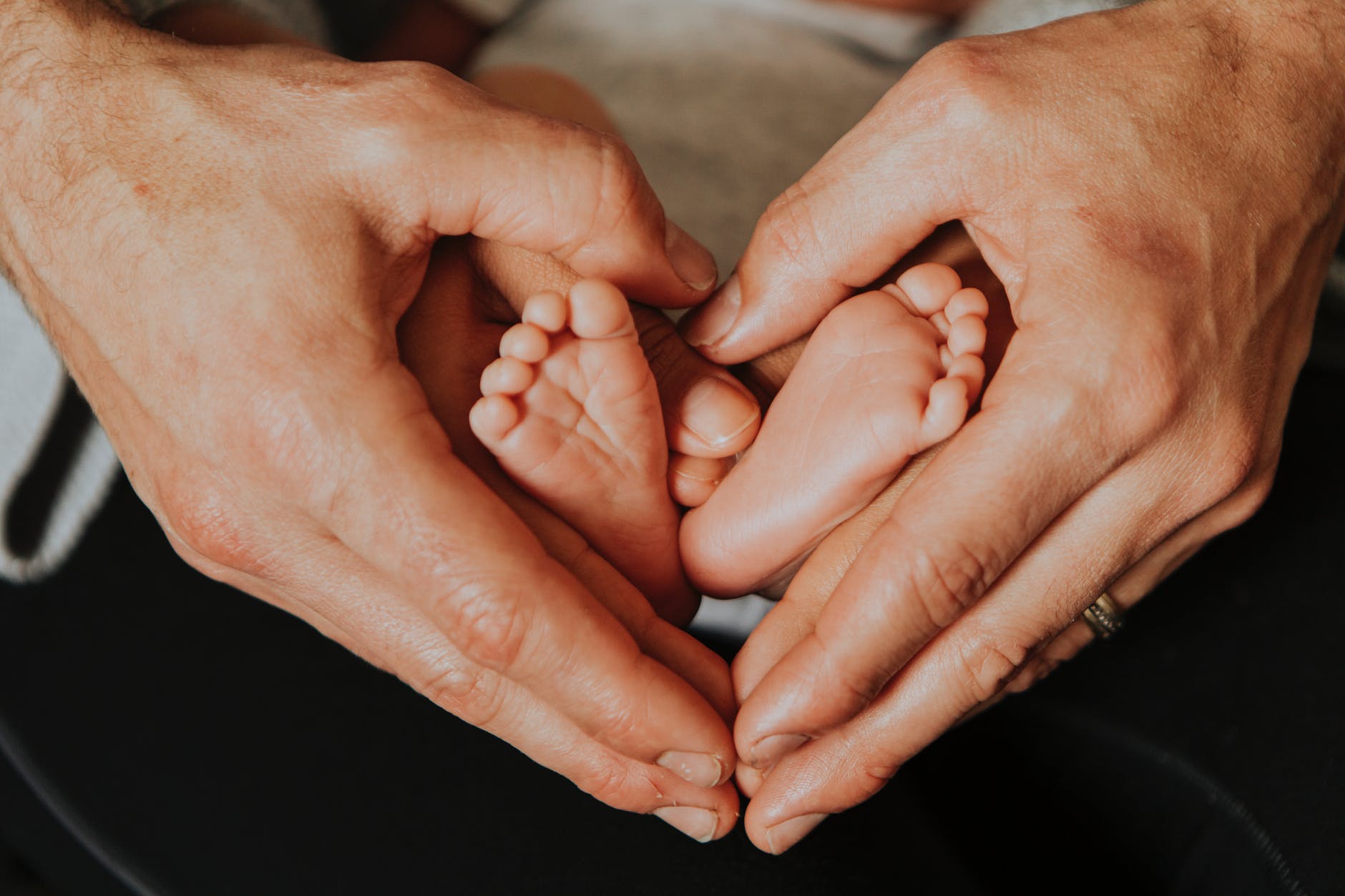 Many are concerned that this type of program could become mandatory for all new parents. In turn leading to more children removed from homes by CPS, and it may even be used to enforce mandatory vaccines.

But is it? Lets look at the bigger picture.

Currently the bill requires the Oregon Health Authority (OHA) to study universal home visits, and to report back to the legislature by December 2019.

Though the language of the bill is currently very thin, we can look at those responsible for pushing this bill forward, as well as the officials that have spoken on the matter.

Senator Haywood has a Past

Most apparently is the connection between one of the head sponsors Senator Haywood, who has pushed forward legislation in the past that has raised some eyebrows.

In fact she has previously proposed 4 bills which would limited, or completely removed a parent’s right to chose whether to vaccinate their children or not, in someway shape or form. Though we won’t be looking at all of those bills today, you can view more at this site.

So what does being extremely pro-vaccine have to do with the current bill?

Universal home visits from nurses or otherwise “certified” state officals, can easily be used to enforce vaccine regulation. Not only by having a nurse constantly reminding you about the need to vaccinate, but also having the power to call child protective services should they feel your child is “at risk”.

SB526 creates a “soft” police force of home visiting nurses who essentially become state employees. This policing power could result in intimidating parents into complying, or risk loosing their children.

Here’s the deal, it’s not just those concerned about vaccines being forced upon their children that worry about CPS. Opening the door to a wide range of intrusion from “certified individuals” that can call CPS if they don’t like the what you raise your older children, or your personal choices about your health and the health of your family.

Though Family Connects submitted data from a study which showed that those that utilized their services were slightly less likey to be visited by CPS and the fact that there is nothing wrong with choosing to pay a nurse to check up on your children, there is a huge difference when the workers, work for the state.

The difference between choosing to pay out of pocket or through your private insurance to receive at home services, and having the government provide “free’ universal visits is one of the concerns.

The moment that these services are funded by the government, the visitors do not work for you, but for the State. Essentially creating an environment for state officials to enter and examine your home condition s as well as your children. Once they are in, the government can pass amendment after amendment to suite their needs.

Will the universal visits be mandatory?

As of yet, no one, has the answer this question. But many are talking about it as if it will be mandatory for all new parents to receive these visits. Though we may not know until the legislation is actually written, it is important that those concerned with this issue, we cannot let this question go un-answered.

In particular a slide show put together by OHA calls the initiative a “mandate”. Does this mean it will be mandatory? Perhaps its too soon to tell, but when they call it an “emergency” it raises alarms. 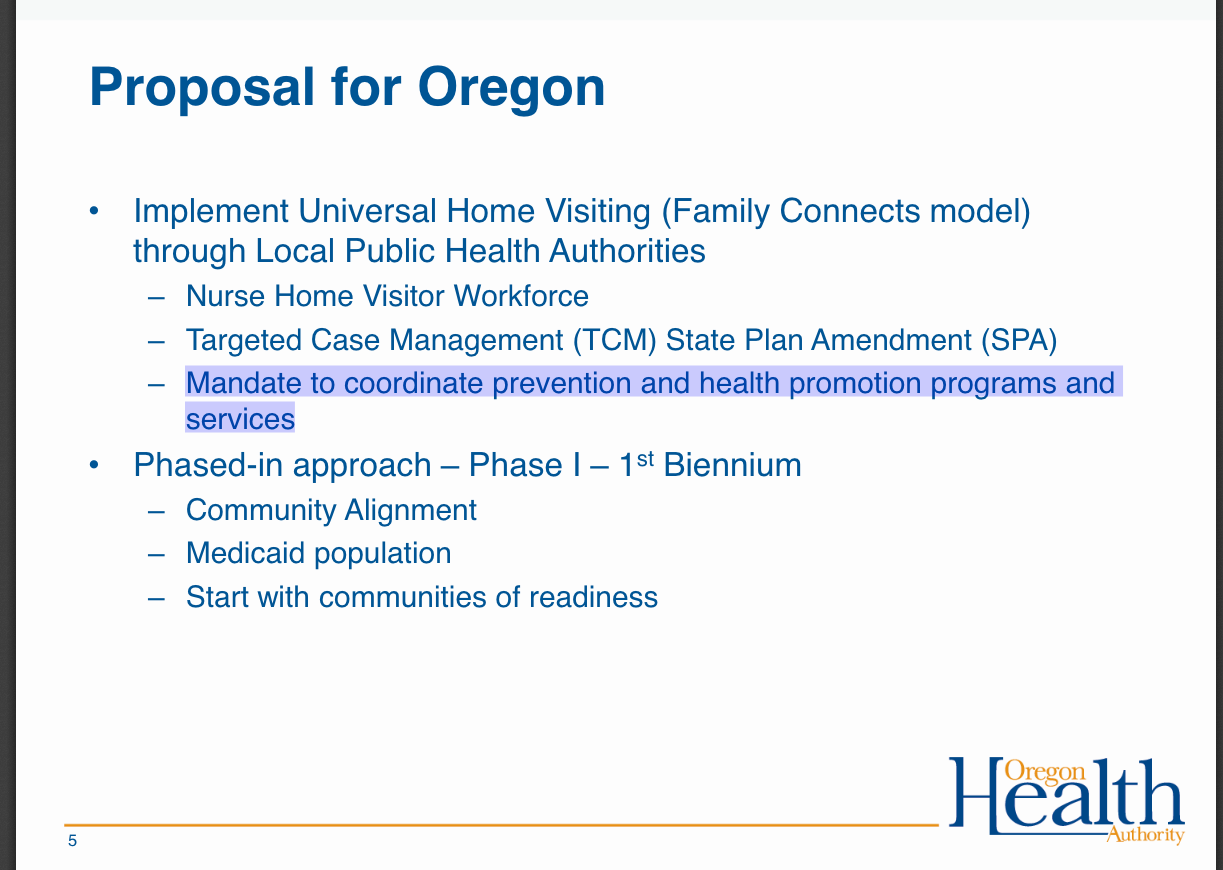 Universal Home Visits in Other States

Although Oregon is the first state to push through this type of legislation, other states have in the past have entertained this idea, and several state officials have talked about moving forward with similar legislation.

For example, on Janurary 15th, 2019, Governor Jay Inslee of Washington State, mentioned in a tweet that his new budget offers “universal home visits”. 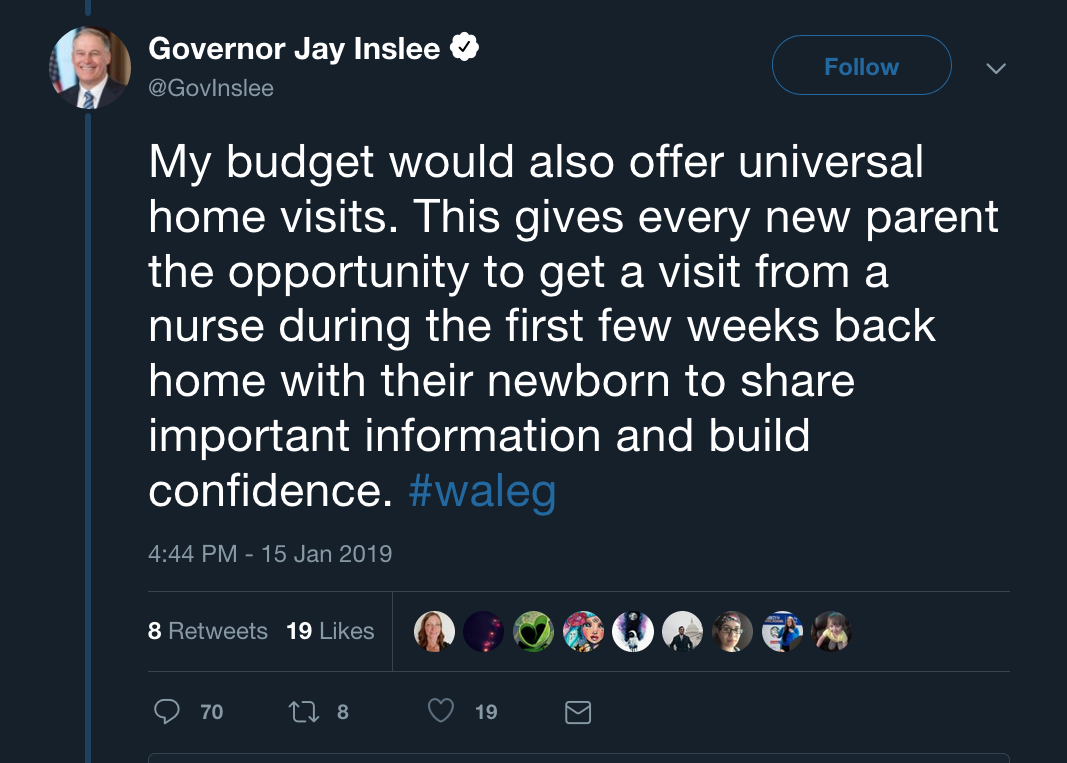 Other states may be working toward similar legislation, California has tried in the past. Additionally, last year a ballot initiative for universal home “care” was on Maine’s ballot, but it was voted down.

For the preservation of the rights of parents, it is important to be certain that this bill is not “mandatory”, and is indeed voluntary. Additionally, it is important that those who choose to opt out will not be target by CPS for their choices.

Unless the legislature gives more information on their intentions, we may have to see the proposed bill in it’s fulk written form for the answer.

But to those unconcerned I say, once your door is opened to the State, it will not easily be closed.